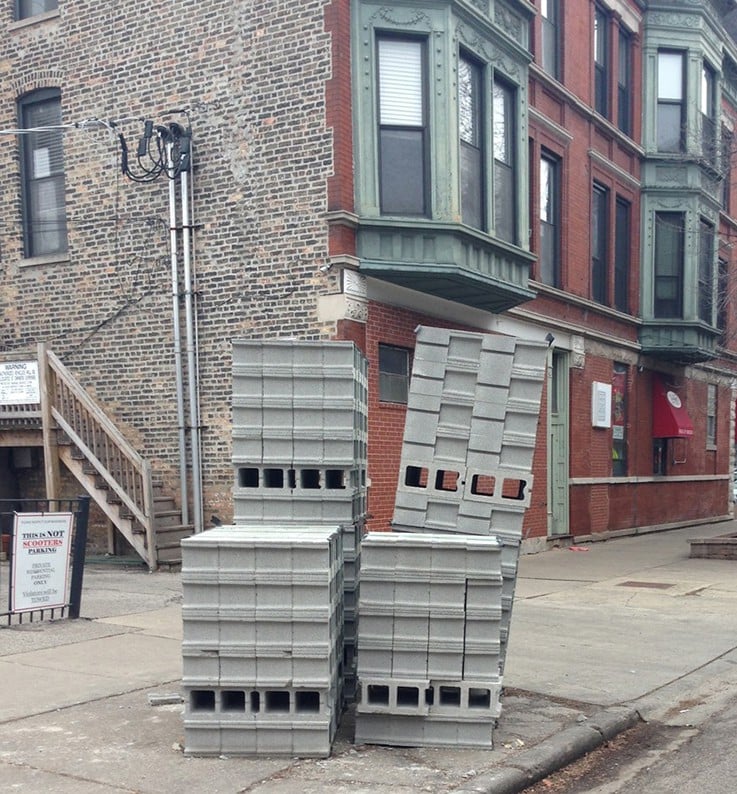 This is the second in an ongoing series of safety-related posts.
See entries Part 1 and Part 3.

I was driving through Chicago's Lakeview neighborhood and saw how a mason contractor had "staged" these concrete blocks.

When you figure that each of these concrete blocks weighs about 25 pounds when wet (it had rained the night before and these blocks were very saturated), this tippy tower weighs over 3500 pounds, certainly enough to break a bone or worse.

The increase in time required to properly stage materials is negligible if you have the right training and know what you are doing. If you see dangerous and hazardous condition like this, call 311 right away and report it.

This is the first in an ongoing series of safety-related posts. See later entries Part 2 and Part 3.

I was recently driving up Damen Avenue on the north side of Chicago. A group of masons I did not recognize were working on restoring this garage parapet wall. What I saw concerned me greatly, so I pulled over and snapped this photo. 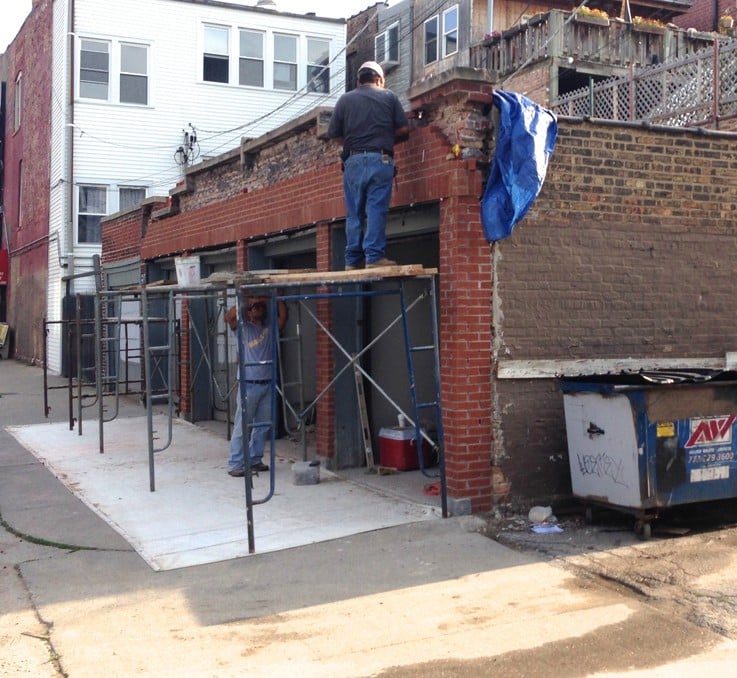 Regarding safety, this is what concerned me:

Regarding the work performed, this is what concerned me: 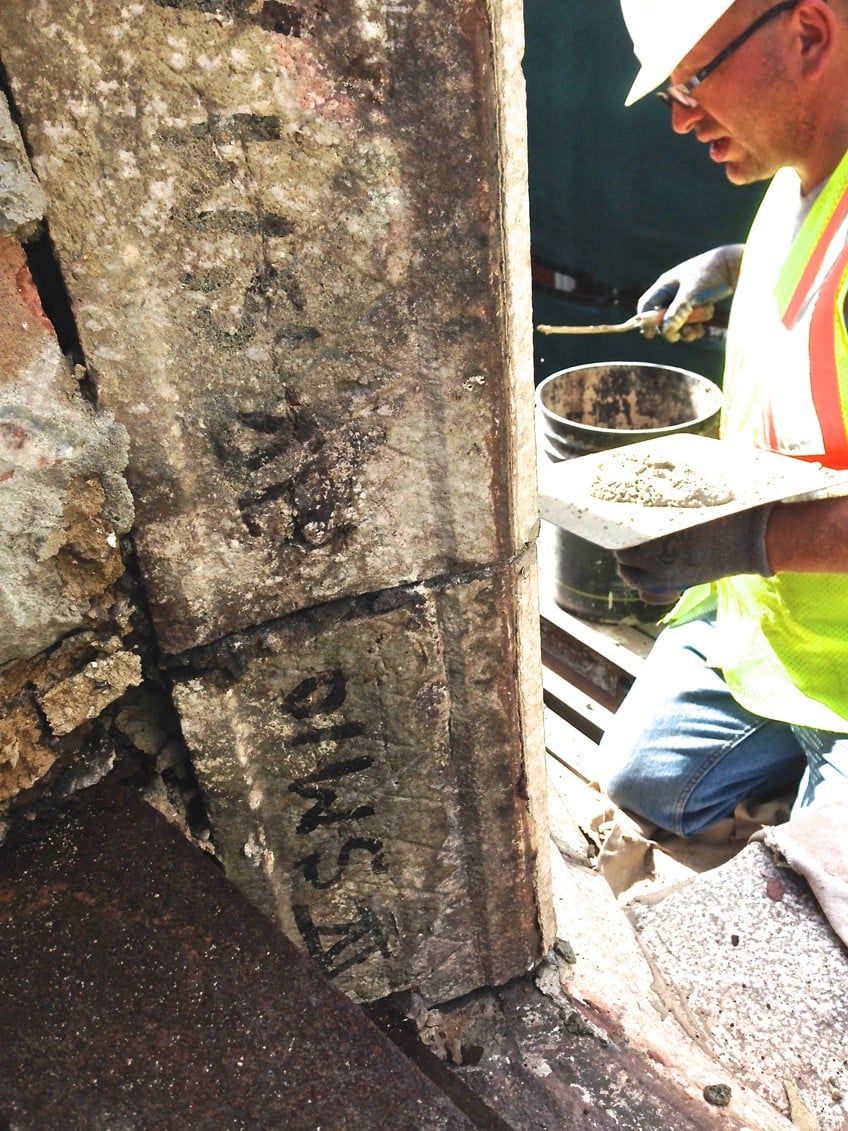 For the next few weeks we are back in Oak Park working on a lovely double-courtyard brick and terra cotta condominium building constructed in the very early 1900s. It is always a pleasure working on masonry buildings of this vintage because the materials used were of the very highest quality and the building methods employed by the original masons were so fantastic. We consider structures erected immediately following the Great Chicago Fire of 1871 through the 1920s to be some of the very best examples of masonry construction ever produced in the Midwest, a period during which enduring quality was of paramount importance. (These days, the drive for quality appears to have been supplanted by the drive for quick profit, as evidenced by all of the split-face block, engineered stone and brick veneer we see in newer masonry structures.)

In the photo at rightabove, Adam is about to start tuckpointing a portion of the 100-year-old terra cotta parapet wall. As you look at the edge of this parapet wall, you can see how each piece of terra cotta was hand-numbered by the original terra cotta fabricator a century ago. The edges of the terra cotta pieces will be covered up with closely matching wire-cut face bricks and tinted mortar as the rebuilding continues. Perhaps AAA-1 Masonry & Tuckpointing will have the opportunity to rebuild this parapet wall in another 100 years?

Whether your masonry structure is a century-old brick and terra cotta building like this one or a single-family home constructed in the last 20 years, we have the experience to diagnose and address your masonry issues. We look forward to working with you! 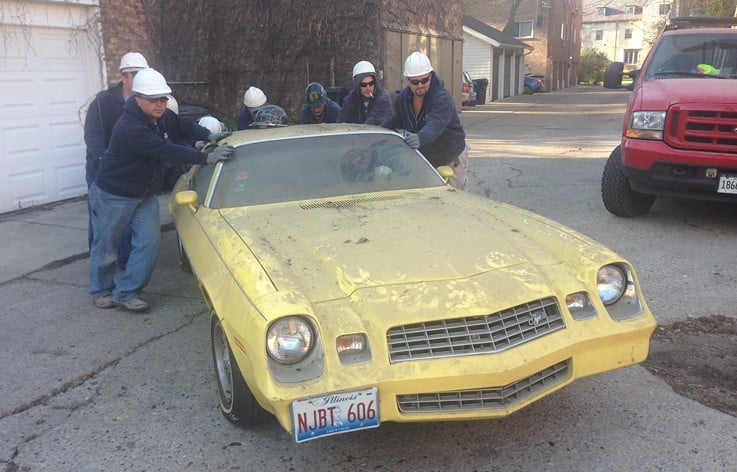 Recently AAA-1 Masonry & Tuckpointing's licensed masons were called out to repair a 1920's multi-unit building on the north side of Evanston. Little did we know that the job would require the relocation of the Owner's inoperable 1975 Pontiac TransAm prior to starting our work (we later learned that the car had not been moved in over 4 years…that's four years of dust on the car!)

As is often the case in the restoration business, you never really know everything a job will entail until you get started. Fortunately, many hands make light work, and our 8 pushers and 1 driver were able to make the necessary 5-point turn in the alley and get the car situated on a grassy spot a few yards away.

(By the way, the masonry work looks spectacular!)